In evaluating an opportunity or facing a challenge, we look to the three levels of reward and goals and arrive at a few leadership archetypes. Here we explore the "Lizard Leader".  Some point to our model and see Maslow's pyramid, and that's fair, and describe parallels to the three levels. A better comparison is MacLean's Tri-une brain theory. 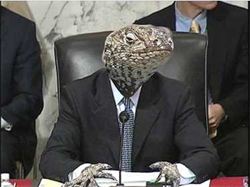 MacLean referenced the different structures of human brains and those of animals and divides it into three parts, hence TRI-une brain theory. The three parts provide feedback and crosstalk to form our worldview and our responses to our environment.

The lowest level of the brain is the brain stem and its main function is continuation of living, in a word: survival. He calls this the "reptilian brain" because it is essentially the neural structure of reptiles. Reptiles care only about the "three F's": Food, Fighting for survival, and reproduction or "Finding a mate".

In ServeThrival Leadership this level is exemplified by the archetype of a "prosecutor". The needs and rewards are found in the physical realm. The Lizard people don't often rise to leadership positions, but in some harsh and controlled environments they become managers and sometimes rise to higher stations. The Lizard Leader cares only about money and cares little about how it is made.

Their "search for truth" is limited to that which serves their personal and physical desires. The "search" is limited to those facts that support an existing decision. The Lizard Leader will ignore or trivialize anything that doesn't support their hypothesis.

Lizard Leaders can take as much feedback as possible, as long as it is unqualified praise. They shut down peers or subordinates with a stare or by putting up a hand when anything that might sniff of criticism appears.

Lizard Leaders inspire one thing: fear. They get compliance, not collaboration. After seeing the Lizard Leader maul and devour your co-workers, you know that it is only a matter of time before its your turn.

Dealing with Followers: The Lizard Leader sees people as an means to an end and utterly interchangeable and disposable.

Followers are "subordinates" and those who stick around are often well compensated, because that's how a Lizard Leader wishes to be rewarded and thinks physical comfort is what everyone is seeking. The Lizard Leader leads with rules and policy manuals and corrects "problem behaviors" with a system of progressive punishment (write ups). Lizard Leaders don't document employee interaction for purposes of making them better, but instead to maintain a legally defensible position when they finally get their way and terminate the employee.

They are political operators, in the worst way, and tend to be sycophants when dealing with anyone higher in the org chart than themselves. This is what they expect from "followers" (indentured servants).

There are specific instances where being a Lizard Leader is helpful, but they are typically people who have a great deal of technical expertise and outstanding individual contributors who are drafted, via the "peter principle" into a role that is beyond their skill set. The best a follower can hope for is that they will mature into a different style of leader or that the financial gains are significant enough to make life bearable while you make a plan to "fire your leader" and move to another opportunity.

The next level of brain is the Limbic System or the "paleomammilian brain".